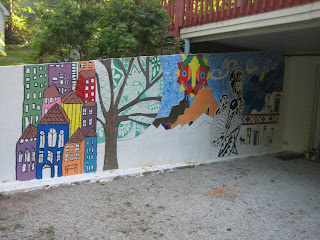 These are some pictures of a mural I helped paint at a professor's lakehouse about a week and a half ago :) 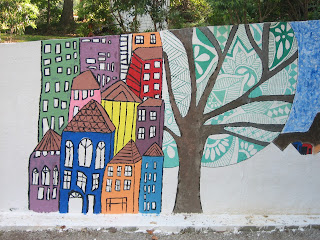 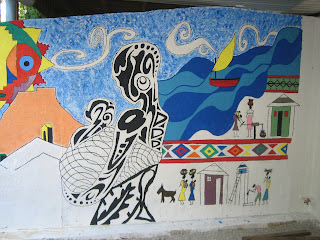 The theme was mother and child since he focuses on maternal and child reproductive health. 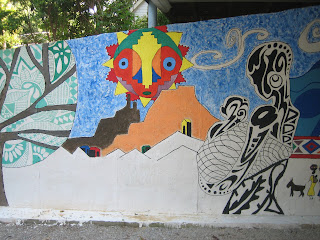 This past weekend was homecoming at Emory, something I never would have known except that someone mentioned it to me in passing. Not only am I not an Emory alum (yet) but being a grad student, I really have no idea what goes on in the main part of campus- I pretty much stay in the health quad.

So last week my friend Meghan mentioned that the Indigo Girls were playing a free concert for part of the homecoming festivities, and was I interested in going? I was like, heck yes! Free concert for a band I like but don't actually know too well, yes please.
So we heard the concert was starting at 3, and got there a few minutes before after grabbing lunch at a Greek place in town. There was a huge carnival like atmosphere with free food, beer, random stuff (squishy balls, key chains, pens, etc), lots of tables from the different schools and alumni groups, giant trampoline with harness, etc. An Emory band opened for the Indigo girls until a little after 4. They were pretty good, but it was HOT outside. I was like, would it disrespectful to pray for rain? But around when Indigo Girls started playing it clouded over a bit and there was a breeze, which was fantastic.
The concert was awesome. They played a lot of their newer stuff which I really liked, and several of their classics that were basically a sing-a-long with the audience. I like how comfortable they are with themselves. They weren't super dressed up on stage, didn't make a whole lot of nonsense smalltalk between songs when they were switching guitars. 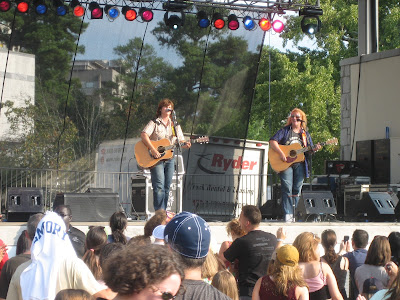 I really enjoy their music as well. They have a rare harmony blend that is simple in some ways, but beautiful and sometimes haunting in unexpected ways. I also really like the lyrics to a lot of their songs- its one thing to write a catchy tune, and another to write poetic lyrics, but its much harder to make them work together. 'Power of Two' is a great song.
After they finished they did an encore of a song I didn't know and then 'Galileo'.
Part of the cool experience of the concert was listening to everyone around me sing a lot of the lyrics, sometimes even harmonies. There were times when the Indigo Girls were like, you guys sing this verse, and everyone did. It's cool to see such a loyal fanbase.
So in conclusion, an awesome concert, and I think I might get some of their newer music on itunes :)

I can't write things down

All of these interesting thoughts that could be posts float through my head and then I forget to write them down. I'm attempting an experiment this week to see if I can blog everyday, even if it's short. Joanna inspired me, what can I say? =)
I had a good conversation with my uncle Art tonight. Granted, I should have been doing homework, but this actually turned into a better than normal conversation that I'm glad I took the time for. Sometimes I can't wrap my brain around how much the world has changed in the last 75 years (arbitrary number, slightly younger than my uncle). To hear his stories of growing up in the rural south as the son of a minister and a teacher, moving a lot, not having a lot of money but making ends meet, milking cows and feeding chickens. It seems eons removed from my life today, growing up in suburbia. Yet I feel like it's part of my past too, and I want to learn more about it. I was intrigued a few weeks ago studying polio briefly in one of my classes, because my grandfather had polio, or a polio-like illness, in 1946. The doctors were baffled as to what it was, which makes me think that it wasn't polio (I'm pretty sure they could recognize it at that time). I tried looking up some of the generic symptoms my uncle was telling me about, but there's really no way I can figure out what it was without a medical record or interviewing someone that was there. But I know they had recently got sulfa drugs at that point, and then penicillin, which was life changing.
Maybe the fact that there are such drastic changes in the last several decades is one reason I love biographies and learning about people's lives- so many of them are so different from my own, simply because of when and where they lived. Sure, reading the biography of a president is informative, but I think reading Laura Ingalls Wilder is just as informative, because it tells how a whole generation of people lived, even if they weren't famous. I wish I could persuade lots of my relatives to write their memoirs simply to record how things were, how they grew up, what life was like in a different time. Famous is relative anyway. One reason I like to write things down is I wonder if in 60 years, my notes and commentary of how I am living today will shed light on now, whereas the future could be vastly different. I don't really thing I'm going to be famous and that people will what to know every detail of my childhood; rather I want to preserve this moment in time for the future.
Why do you blog?
Posted by Mary at 10:36 PM No comments:

Someday, there will be an actual post that's not in bullets. Someday. but until then... bullets! :D
- The shuttle system here and I are sort of fighting. On Tuesday, it just didn't show up for almost a 1/2 hour. So I wound up driving to class, being slightly late, and very angry. I called them later in the day and they are supposed to get back to me about what the heck happened. Yesterday I decided to walk home from campus and it took about 45 minutes... in the Georgia heat so I almost died :P
- I'm still trying to wrap my brain around epidemiology, but I love it. I'm still learning my way around case design and interpreting data, but its SO cool. And even though my case study class can be hard, I really really like it.
- I learned how to bake fish! And it only caught fire once. What actually caught fire was the butter that melted off of the fish, and that's because I was trying to broil it and it was a little close to the broiler. All I had to do was take it out of the oven and blow it out, and the fish was fine, the aluminum foil was black. Smoke detector didn't go off though, which makes me wonder what it will take to make it go off :P Also made me think I should get a fire extinguisher if I continue to experiment while cooking.
- Georgia might actually have seasons... shocking I know!! But it's getting cool at night which makes walking to the bus stop nice, and then we can prop the door open at night for a breeze.
- It might be a good idea if I let the rest of the world know where I lived. I keep meaning to e-mail my friends and family with an address update, and I need to get my drivers license switched too. Oops.
- The hardest thing about my degree right now is choosing between all of the different cool things I could do. There are like 400 different things that interest me and I need to narrow down experiences I want to get and classes to take. But EVERYTHING here is so freaking cool and interesting... what a great problem to have :D
- I own a suit now. I don't know if this means I've arrived or sold out. But I needed it for a job fair last week, so I officially own a suit.
Posted by Mary at 2:57 PM No comments:

States I've been to

Mary
Maryland, United States
I'm an RPCV (Botswana 2012-2014) and I work in public health in Maryland. I love being outside, hanging out with people, creating things, and of course, traveling. I document all of the above here on this blog.